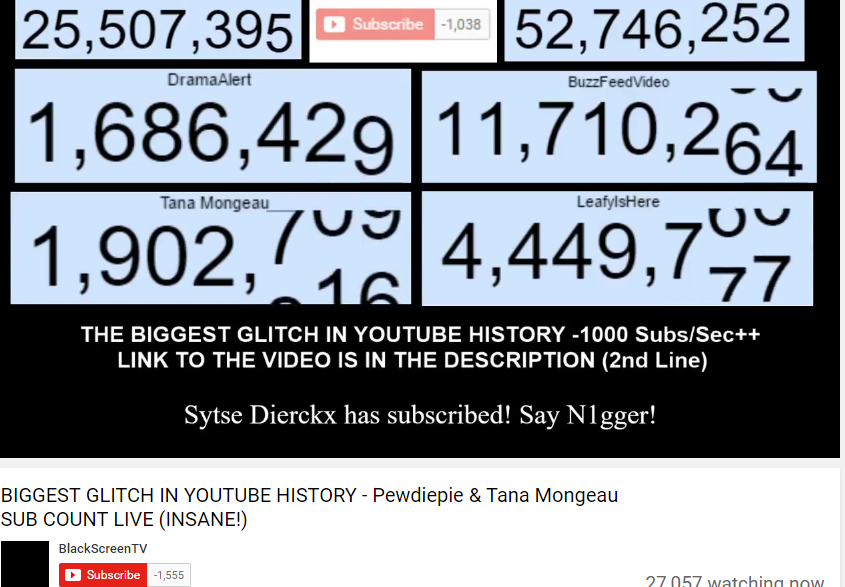 A massive YouTube Glitch has seen many popular YouTube channels see there subscriber counts drop by Millions of people in a matter of hours.

The bug began early on Wednesday evening and was live streamed on YouTube to over 30,000 people by BlackScreenTV, who himself lost over 30,000 subscribers in 30 minutes.

@h3h3productions We’re aware! No subs or data is lost, it’s an issue w/ how the sub count # is being displayed. We’re working to fix it.

The YouTube Glitch saw their biggest user Pewdiepie log on and live-stream as the chaos unfolded with him saying that he had lost over 3 million subscribers in a matter of hours.

Several other YouTubers including DramaAlert, Buzzfeedvideo and Leafyishere were also reporting major drops in there subscriber counts.

@h3h3productions This bug started on Monday (Feb 6), so not related. We should have the fix out shortly!

Internet statistics website Social-blade crashed under the thousands of people flocking to the website to try and see why there sub counts were suddenly dropping live.

The issue is also affecting YouTube’s personal channel which lost thousands of subscribers in a matter of hours.

The complete confusion forced YouTube to update people via there support twitter page, telling them that a fix was being implemented.

YouTube has also confirmed that while there has been no data or real time subscribers lost, the issue with the sub counts is on going and the real time display of the counts is well and truly affected in real-time.

I think I deserve a stone play button for being the first person to hit -1,555 subscribers on the history of YouTube

He also made a video describing exactly what was happening during the chaos and you can view it by clicking HERE with him describing his negative sub count as his “negative subscriber army” after he lost all his subscribers in 10 seconds.

UPDATE 23:55 GMT: It now appears that 1 unsubscribe is currently being counted as -100 unsubscribes and as of right now Tana Mongeau could be the first major YouTuber to drop below 1 million subs.

UPDATE: 00:02 GMT: Xeneth becomes another YouTuber to drop to 0 subscribers and demands YouTube fix their bug!

UPDATE 00:54 GMT : YouTube star Leafyishere has posted a rant video on why he has lost a million subscribers in 2 hours:

UPDATE : 01:00 GMT:  With the internet now well aware of the YouTube Glitch, Twitter has officially gone into meltdown with over 100 posts a minute addressing the issue.

UPDATE : 01:13 GMT: It now appears even channels with low subscriber counts are suffering the YouTube Glitch as this tweet below shows: